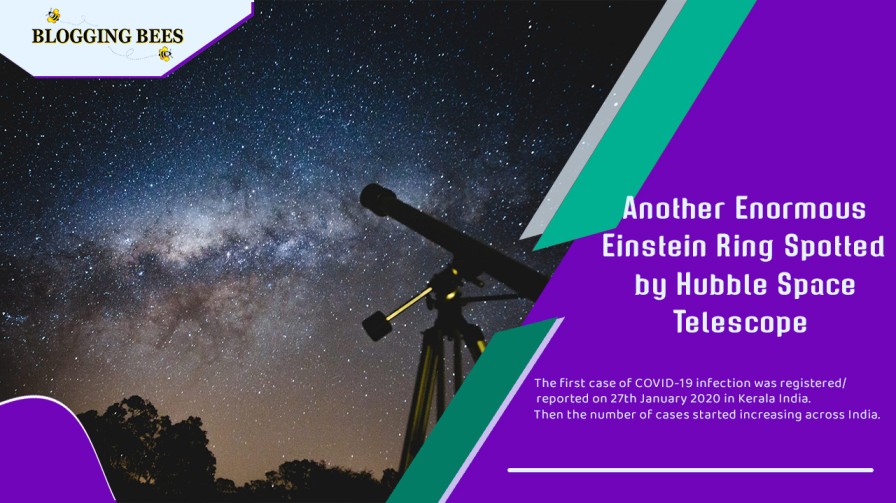 An Einstein ring has multiple names. It is also called a Chwolson ring or Einstein–Chwolson ring. The Einstein ring forms when light from a galaxy or star passes by a vast/gigantic object which is en route to the Earth. This light gets diverted due to gravitational lensing & creates an illusion like it is coming from different places. If all the source, lens, & observer are aligned, then the light appears as a ring.

The Einstein ring has an extreme diameter which is approx. 20 arc seconds. According to scientists, this ring showcases two extremely distant galaxies, which results in double arcs & differences in colour. The unusual & enormous shape of this ring can be explained by Einstein general theory of relativity, which explains the process of gravitational lensing.

After observing this image more precisely, scientists/astronomers predicted that there are two galaxies aligned with each other. The light we see comes from the galaxy in the background but due to the central elliptical galaxy of the cluster in between Hubble Space Telescope & background galaxy light gets distorted into the curve. But in this case, this middle central elliptical galaxy of the cluster helps to magnify the background galaxy image into an enormous & almost perfect ring. The other galaxies in the cluster cause additional light distortions.

This discovery of the new Einstein ring is similar to the perfect laboratory which helps them to study galaxies which are too distant & faint to see or observe without light distortion or the magical phenomenon called gravitational lensing.

I hope you enjoyed reading this article. I am working to bring new & exciting article for you so Stay Tuned!